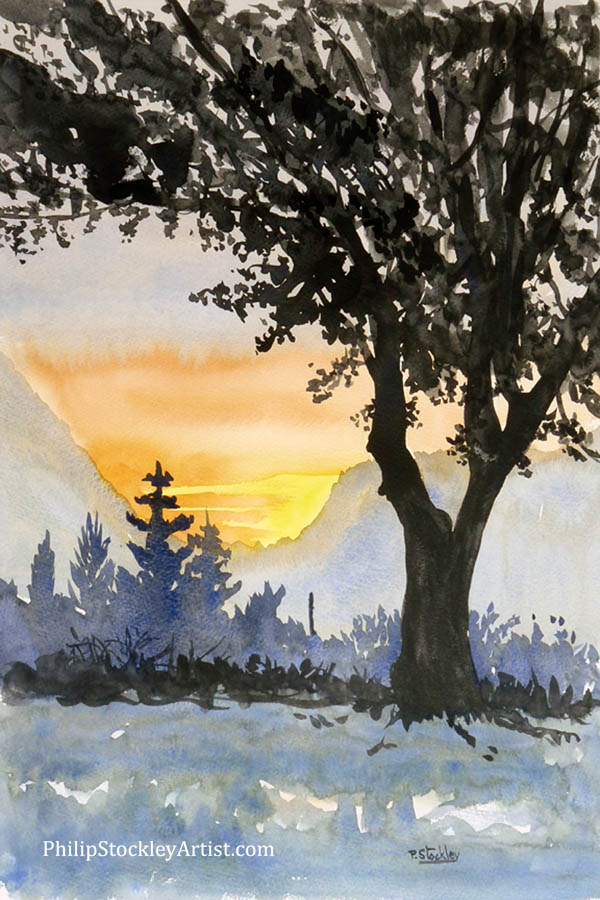 ← Previous Next →
Return to Gallery
This picture is based on a photo I took on a holiday in Turkey, when we stayed in an isolated house in the hills west of Marmaris.  The view of the sunset each evening was spectacular, with the sun seemingly being swallowed by the sea in the distance.

The house was a bit ‘rustic’ and the highlight of the holiday, for our young boys, was a life and death struggle which took place in front of us in the living room.  No, not on Television!  On the wall itself, between a huge spider and a scorpion.  They literally bumped into each other  when walking across the wall,  and the scorpion grabbed one of the spider’s legs with its pinchers.  They manouvered back and forth like two wrestlers for some time – before I was delegated to sweep them both up and throw them outside.

The boys were very keen to tell the owner of the house about the scorpion and the spider.  His face was a picture as he wrestled with trying to listen politely to the children telling him their story, while wondering  how a giant spider and a scorpion happened to be in his property, and what would have happened if one of his guests had stood on them!

Interesting Facts:
For some years I had thought witnessing a fight between a spider and a scorpion was fairly unique.  However, for this post I googled  ‘fight between spider and scorpion’ and was surprised to find quite a lot of hits – including videos. Sadly, some of these fights seem to have been set up on purpose.